Server with the fringe on "top"...

Just stumbled on a much nicer, expanded version of the *nix command line tool top (process listing/manager tool), called htop.  Cool - what I especially like about it is its little graphical display of cpu usage meters for each individual processor in a machine; the rest looks similar to top but with highlighting and extra features - and all configurable.  And you can scroll up and down the processing listing too!

Looks like it's installed by default already on my Ubuntu machines, but not on my Macs.  (And for the record I think the output formatting in the OSX version of top is awful anyway!)  For that I found this guy's webpage offering a precompiled OSX binary (but you could compile it yourself if you prefer, see link at bottom of his page).

Here's a screenshot of what it looks like on one of our 8-processor Ubuntu cluster nodes... 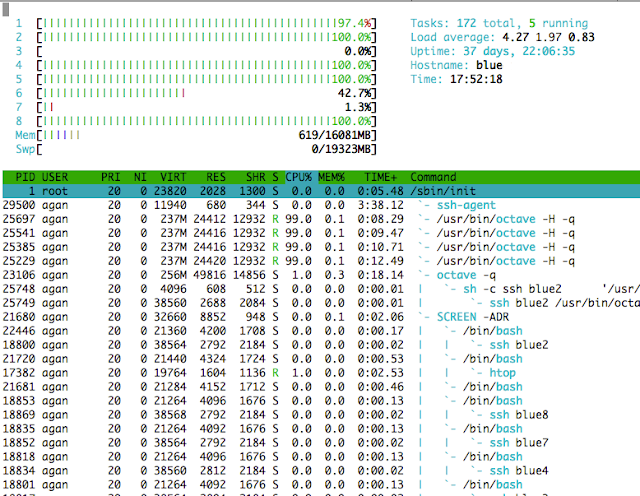 (apologies for the title pun, couldn't help myself.  ;-)
Posted by Andy Ganse at 6:09 PM No comments:

Email ThisBlogThis!Share to TwitterShare to FacebookShare to Pinterest
Labels: computing

Ha ha ha!  Look what it said in my fortune cookie the other day as I was writing about the quirks of my nonlinear inversion...  The fortune cookie described the trouble exactly! 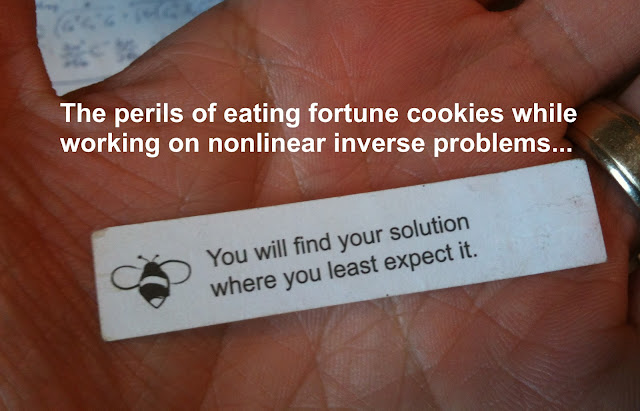 Posted by Andy Ganse at 4:10 PM No comments:

There's a neat photo decorating a bus stop near my home - one of those motion-blur shots where the artist intentionally moved the camera while taking the picture.  Looking at the whole picture on the bus stop you can tell it's of a city-scape (Seattle's presumably, given where the bus stop is and the title of the photo listed on it).  Kudos to photographer Anna-Mária Vág who is listed as the creator of this neat snapshot. 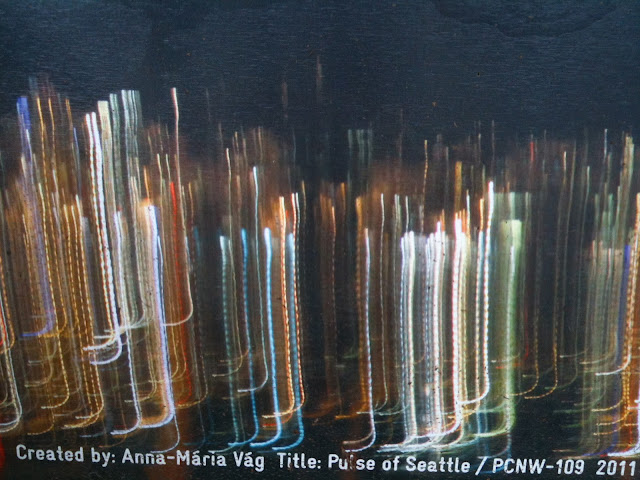 So it's pretty, but here's what I especially further like about it, being a physicist and electrical engineer before that.  Look closely at a zoom-in of the photo (or the original above for that matter): 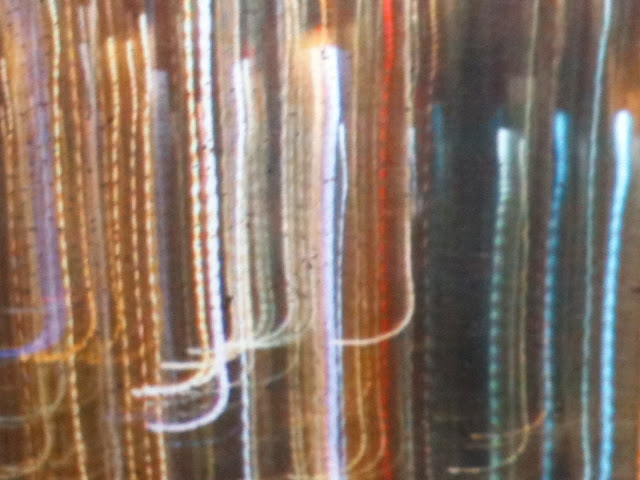 Not only do we see blurred streams of light in this photo, but we also see that the lights are blinking on and off and on again.  That's because our power, and thus most of our lighting, runs on AC - alternating current - which takes the form of a sin wave going on and off (brighter and dimmer) 60 times per second, or 60Hz.  Besides photos like this, another common place you'll see this is if you're using a pair of binoculars to look at a nighttime cityscape, and move the binocs around in a circle or back and forth.

In the photo we see that although the buildings are separated by wide distances, most of their lighting is not only blinking, but blinking in phase - meaning in sync with each other.  If you took a better snapshot than mine of this photo, and then placed a ruler on it to draw lines between the bright (or dark) parts of the streaks, you'd see most of them make nice straight lines, all the way across the photo of the city.  The electrons zipping over the electrical supply wires for the city are moving @#$% fast to accomplish that.  They're not quite moving at c, the speed of light in a vacuum we talk about in relativity discussions etc. - they're going slightly less than that because these electrons are moving through copper wires.  But it's still really darned fast!

I said "most" of the ruler lines make nice straight lines - some are a bit off, yet still appear in sync with each other - what's going on there?  It turns out not only is the city running on AC power, but it's actually running on three supplies of AC power at once; they call this "three phase power".  The three phases are 120° off from each other, i.e. if you add up the phase angle of all three you get 360°, which allows for a convenient and efficient trick for running the wiring for the power as well as for turning on industrial motors.  The blink patterns in this photo that are not right in a line with each other appear to be roughly 1/3 off from the others, which is consistent with that 120° and 240° business.

Cameras and binocs aside, you may even find that when standing under some types of street lights (or looking at certain car/bus taillights, or modern car nighttime dashboards, or digital projectors, etc), and glance your eyes back and forth, you'll see them blinking directly yourself without further aid.  Which frankly is really @#$% annoying when you're trying to concentrate on something else, like driving.  But what the heck, at least it gives you a moment to appreciate some of this neat stuff, and to realize just how fast those electrons are moving!

Posted by Andy Ganse at 1:06 PM No comments: